Note: We no longer offer the Classic London Private Tour by car. The combined cost of fuel, parking, road tax, congestion charges and operating licences means we cannot effectively give value for money with this option.

Your guide will meet you at your central London hotel or agreed meeting point at the specified time. Then, laugh, gasp and shake your head as your Classic London Private Tour takes you through the sights, sounds and stories of one of the world’s greatest cities. Depending on the day booked, the tour may also include the Changing of the Guard at Buckingham Palace.  Skip-the-line tickets to all attractions in your itinerary will be booked and added to your tour price.

Tower of London & Crown Jewels
Blood, Bling & Beefeaters! It’s ‘off with your head’ as we take a private guided tour of the Tower of London, London’s oldest building and a World Heritage site. Officially known as Her Majesty’s Palace and Fortress but once described by Shakespeare as ‘The Slaughterhouse’. The original ‘Tower’ was built for William the Conqueror almost 1,000 years ago, and as you will see, successive monarchs added their own defences over the years (to demonstrate their popularity!). The tour touches on the tragic tale of Anne Boleyn, second wife of Henry VIII. You will discover his cruelty knew no bounds. See the awesome Crown Jewels, king of bling! Seek out the mysterious ravens. Smile with a superb photo opportunity in front of Tower Bridge. And hear how the famous Beefeaters, also known as the Yeoman Warders, with costumes designed in Henry’s reign, look after a London landmark simply drenched in history.

Changing of the Guard*
Depending on the day booked, the Classic London Private Tour may include the Changing of the Guard ceremony at Buckingham Palace. All the Queen’s horses and all the Queen’s men in the kind of pomp that only London does best. Your guide will explain this centuries-old tradition, run through the regiments that take part, regale you with regal tales, and, as the military band marches by, bag you the best spot for photos of this popular pageant of colour.
*Note: the ceremony usually takes place on Sunday’s, Monday’s, Wednesday’s and Friday’s between August and May and daily during June and July. It does not take place at all during wet weather. If the ceremony is not scheduled on the tour date, guided tours of other attractions will be extended.

Churchill’s Bunker
A private tour of British Prime Minister Winston Churchill’s World War Two underground HQ, also known as Churchill’s War Rooms. Here, that terrible conflict is brought to life. The war rooms were completed just before the outbreak of war, accommodating map rooms, cipher rooms, switchboards and emergency living quarters used for the entire 1,562 nights of the war. From here, many of Churchill’s great speeches were broadcast. Almost all his directives and instructions were dictated in these rooms. Room 63 was a broom cupboard disguised as lavatory where Churchill had his hotline to President Roosevelt. It was set up using a revolutionary encryption device to mask conversation with ‘white noise’. A fascinating time capsule, the bunker closed down in 1945 and was not re-discovered until 1973. It also features the superb Churchill museum, featuring interactive exhibits, mementos from his life and the original door from No.10 Downing Street.

Wednesdays & Fridays are usually best for this tour – why? 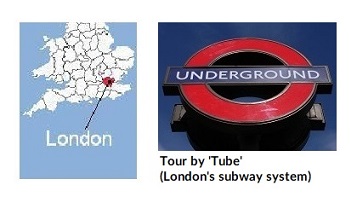