Introduction
Your driver-guide will pick-you up from your central London hotel or place of residence at the specified time. We recommend 8am. After a fast-route from London, our Private Jane Austen Tour take us to her beloved county of Hampshire. We cannot promise a chance meeting with a modern-day Darcy, but we can promise an enjoyable day out.

Jane Austen
Active from 1800-1816, Jane Austen only completed six novels before being cruelly stuck down by illness in her early 40s. However, the romantic and humorous nature of her works ensured she became one of the most widely-read female authors in English literature.

Steventon
This Hampshire village is the birth-place of Austen, and where she spent her first 25 years. Here she drafted Pride & Prejudice, Northanger Abbey and Sense & Sensibility. The 12th century parish church has changed little since Jane attended and contains memorials to the Austen family.

Lunch
Your driver-guide will suggest appropriate lunch options on the day. Perhaps a tea-room,  restaurant or traditional pub. Alternatively, you may want to bring a pre-packed lunch or just grab a sandwich. It’s your tour, it’s your choice. (Note: Private Jane Austen Tour price does not include food or refreshments).

Chawton
We take a guided tour of the 17th century house where Austen spent the productive part of her writing career. It is now a small private museum and has been welcoming visiting Austen fans since as far back as 1947. We will also view the manor house once owned by her brother.

Winchester
This historic city appeared as a movie location for the film version of Austen’s Pride and Prejudice.  We will see the house where Austen lived during the last months of her terminal illness, and take a personal tour of Winchester Cathedral, her final resting place. 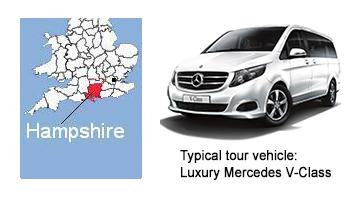