Introduction
Your driver-guide will pick-you up from your central London hotel or place of residence at the specified time. We recommend 8am. After a fast-route from London, our Private Stonehenge-Avebury Tour takes us back in time and deep into the county of Wiltshire, and the mysterious monuments surrounding the enigmatic Stonehenge and Avebury areas.

Supernatural Stonehenge
Our tour begins with a personally guided tour of the mysterious Stonehenge, an ancient megalithic structure older than the pyramids of Egypt, and a rare survivor of the pre-historic world. Of course, one of the greatest mysteries is how on Earth did they get there?

Mysterious Woodhenge
Journeying north, we discuss the huge ancient chalk carvings that decorate the slopes of local hills. Soon, we reach Woodhenge and the ancient settlement of Durrington Walls. Latest finds from recent digs around this area will help us theorise on the meaning of the landscape.

Lunch
Your driver-guide will suggest appropriate lunch options on the day. Perhaps a tea-room,  restaurant or traditional pub. Alternatively, you may want to bring a pre-packed lunch or just grab a sandwich. It’s your tour, it’s your choice. (Note: Private Stonehenge-Avebury Tour price does not include food or refreshments).

Unexplained Kennett and Silbury
We view the largest prehistoric burial mound in the country, the West Kennet Long Barrow. Skeletons of the ancient were laid in its chambers. Nearby, Silbury Hill is the world’s largest man-made prehistoric mound. Strangely conical in shape, it has kept its secrets as to its use or meaning.

Haunted Avebury
Our day reaches its climax as with a personally guided tour of this spooky village locked-in by the largest stone circle in Britain. Discover the Devil’s Chair, where the dark one himself may be summoned, or the murderous Barber Stone, which exacted a terrible revenge on a villager who tried knock it down. 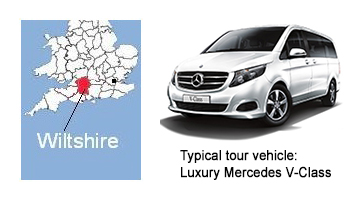